On this page we will feature books that play a part in the Curlew Action mission to educate and inform about the plight of the curlew in the UK, Ireland, and elsewhere.

When you click any link it will open a new tab, taking you to the website for the bookseller. 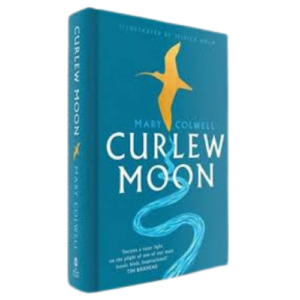 Mary Colwell is the inspiration behind Curlew Action and our CEO. In this book she chronicles a journey she made to highlight the plight of this beautiful bird...

Curlews are the UK's largest wading bird, about the size of a herring gull on long legs. They are particularly known for their evocative calls which embody wild places; they provoke a range of emotions that many have expressed in poetry, art and music. Over the last thirty years curlew numbers have fallen by an alarming 20 per cent across the European continent, and by a staggering 99 per cent in their most western reaches in the Irish Republic. So alarming are the figures that curlews were made a species of highest conservation concern in the UK in December 2015, and put onto the red list of threatened species by the IUCN.

This transition of curlews to high conservation status made it clear they were slipping away for problems that could be addressed with the public and political will to solve them. It was then that the idea of a 500-mile journey by foot began to crystallise in Mary Colwell's mind and became a concrete plan. Colwell decided to take time out to walk from the West coast of Ireland through Wales to the East coast of England to raise awareness about its plight, and to raise funds to protect this beautiful bird and its habitat.

Colwell started walking in the early spring when birds were first arriving on their breeding grounds in the west of Ireland, walking through to Wales when they incubated their eggs. She then travelled through England to coincide with the time when the chicks were hatching. Six weeks after setting out she arrived in East Anglia as the fledglings were beginning to try out their wings. By finishing on the east coast, she marked the place where many curlews would come to spend the winter.

Colwell chronicles her impressive journey in this beautifully illustrated book, weaving a wonderfully told story of the experiences on her walk, interspersed with the natural history of this most impressive of birds that has fascinated us for millennia.